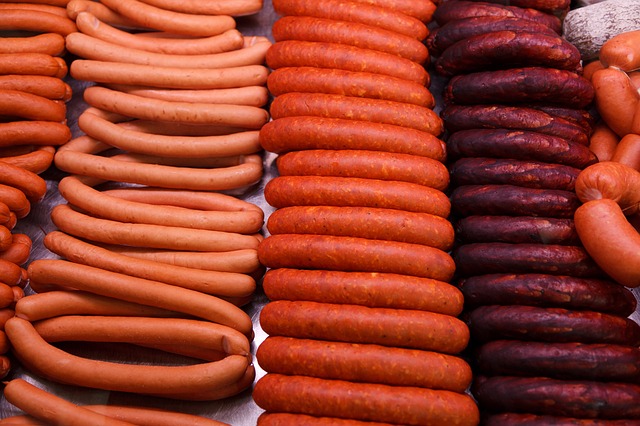 The nation was stunned on Monday when the World Health Organization announced that hot dogs are not healthy…said no one, ever. We all knew—or at least had a sneaking suspicion—that those little tubes of mushy meat product were a questionable dietary choice at best. But if I’m completely honest with myself, sometimes they just hit the spot. And sometimes they’re the only thing those little maniacs that terrorize my husband and me on a daily basis (a.k.a. our offspring) will eat. You know I’m right.

So why the uproar? Is it because the WHO report used the “c-word?” Or because they compared processed meats to cigarettes? Or perhaps because they told us eating processed meats increased your risk of cancer by a whopping 18%? Probably all of the above, plus the fact that it got so much press (thanks, Mark Zuckerberg). Imagine if a report came out tomorrow about smoking. It would be loaded with terrifying (and real) statistics like “smoking increases your risk of lung cancer 25-fold” and “smoking causes 90% of all lung cancers.” It would, rightfully so, get a lot of attention.

I have compiled a list of Frequently Asked Questions about the report and shared it below. For educational purposes, the WHO definition of processed meat is “meat that has been transformed through salting, curing, fermentation, smoking, or other processed to enhance flavor or improve preservation.” Okay, now we know. Moving on.

-Situation 1: In a Pennsylvania town, which is predominantly Amish, almost everyone consumes only food that can be produced within the community without using modern conveniences. However, a small portion of the population eats 50 grams of processed meat daily. The difference in health between the Amish folk and the processed meat lovers will likely be drastically different for reasons other than the differences in processed meat consumption.

-Situation 2: In a poor Southern town, the population tends to eat more affordable foods which tend to be less healthy overall. In this group, the difference in health between someone who eats 50 grams of processed meat and someone who does not will probably not be very different.

Now, average the two studies. See what I mean? This is an extreme example, but it illustrates what the WHO scientists did in their analysis. Which is fine, because they’re the World Health Organization. But when you try to apply their research to a specific population (i.e. Americans), just be careful that you don’t under- or overestimate the impact of the thing being studied. My point is this: We are in America. Americans tend to have a Western diet which can differ drastically from the diets followed in other countries.

Just being human puts you at 5%. Adding processed meats adds another 0.9%.

-Colorectal cancer is a cancer that can be screened for. This means that more cancers are found at early (i.e. treatable and even potentially curable) stages. This is one of many reasons it’s different from a cancer like lung cancer (see below for others).

-Speaking of colorectal cancer screening, it is estimated that if everyone received screening for colorectal cancer according to the guidelines, it would result in a 40% decrease in cancer. That’s because colonoscopies not only allow us to take a look at the colon to see if there are any cancers there to be treated, it also allows us to remove precancerous lesions before they ever cause problems to begin with.

An ideal screening test is applicable to most of the population, screens for a relatively common disease, and changes outcome by diagnosing disease at an earlier stage or preventing the disease altogether.

But anyway, back to my original point: Colorectal cancer screening can reduce your risk from 5% to 3%. That’s a 2% absolute risk reduction. More than two times the increased risk attributed to processed meats.

Bottom line, everything can be bad for you if taken in a high enough quantity. Literally everything. Illicit drugs? Of course. Medications? Certainly. Foods high in fat/carbs/etc? Uh-huh. Water? Yes, even water. Processed foods lie somewhere on that spectrum, closer to the other harmful foods than either illicit drugs or water.

Did I write this piece to make light of cancer or to give blanket permission to eat whatever you want “all day err day?” Of course not. But I give each and every one of the [five] people reading this article permission to not be perfect 100% of the time. And if you are in fact reading this, you probably already think about what you put in your body day in and day out, and you probably don’t eat 50 grams of processed meats a day. If you do…stop it! It’s bad for many reasons, not just for increasing your cancer risk. But if you have the occasional hot dog, don’t kill yourself over it. The most successful dieters are the ones for whom nothing is completely off limits.

Processed meats are just one of many things in this world that contributes to your daily risk of dying. Here are some others: Car crash, plane crash, train crash, bus crash, bike crash, stabbing,… okay, the internet is telling me I’m running out of space, so I’d better wrap it up.

In conclusion, there’s enough badness out there to keep you worrying 24/7. Just try to do your best, make good decisions most of the time, and enjoy living.

I referred to the following when writing this:

International Agency for Research on Cancer