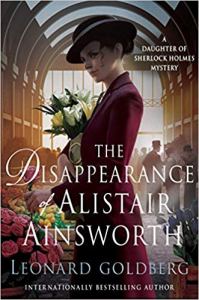 Joanna Blalock returns in the third and final installment of the Daughter of Sherlock Holmes trilogy to solve her most challenging – and arguably most important – mystery yet. A physician colleague of her father-in-law, the one-and-only Watson, has just made a most disturbing house call. After being taken to an undisclosed location to evaluate a man with abdominal pain, he has become convinced that his patient is actually a prisoner.

In The Disappearance of Alistair Ainsworth, Joanna must not only figure out who was kidnapped, but why, how, and where. It is only when armed with all this knowledge that she can put together the pieces of a puzzle that, if unsolved, threatens to compromise Britain’s position in The Great War.

Alistair Ainsworth is a top cryptographer in the British government. He has been kidnapped by the Germans because of his important role in the war effort. If they are able to break him before he is recovered by the Scotland Yard, Germany will be privy to all of England’s war secrets. The stakes could not be higher as the daughter of Sherlock Holmes is brought onto the case. As the clock ticks, she must combine all the pieces and discover the traitor in their midst.

True to her relaxed and unpressured style, Joanna sets about to save the day once again. Never one to succumb to her emotions, she takes each new piece of information and mulls it over, often with a Turkish cigarette in hand. She sees every nuance of a person’s behavior and processes it. No one is presumed innocent or guilty until the facts demand it – but the facts are subtle and often appreciated by Joanna alone until made clear to all by her straightforward and indisputable explanations. As always, once Joanna has explained her thought process, the facts of the case can be seen no other way.

Alistair’s counterparts in the Admiralty Club, a government-run code-breaking unit, work tirelessly to interpret a message intercepted from the German spies. They are sure it’s a hidden clue from their friend. But before the message can be decoded, one of the top suspects from within the cryptographer unit is found murdered – only seconds away from solving the mystery of the code. It is more important than ever that they discover the identity of the traitor in their midst and find Alistair before it is too late and he is forced to reveal more government secrets.

In this compelling stand-alone sequel, no conclusion is obvious and no information can be taken for granted. The reader is along for the ride, never ahead of Joanna in her predictions but also rarely far behind. From specific brands of cigarettes to the sound made by a carriage over a cobblestone road, nothing is too small a detail to be ignored. Without each individual piece of evidence, the story cannot be solved and Alistair will remain a German prisoner.

Goldberg once more transports his readers back in time. We ride with Joanna in a horse-drawn carriage and enjoy a meal of chicken cordon bleu at a fancy French restaurant. We commune with the people of London circa 1915 and become part of the war effort. We begin to think of Joanna as a friend and confidant, and only as the last pages are turned and the book closed for the final time are we spit back into reality, where there exists no one like Joanna Blalock and where most questions can be answered with a quick Google search.

One thought on “Book Review: The Disappearance of Alistair Ainsworth by Leonard Goldberg”